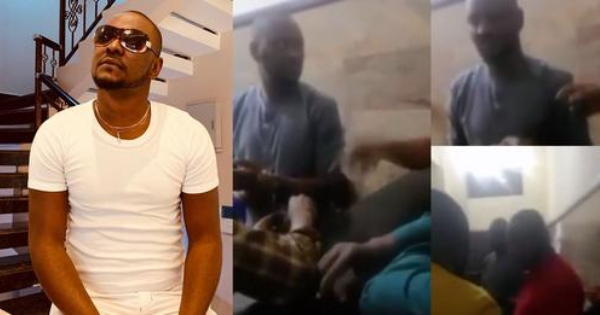 Joseph Egberi aka Prince Kpokpogri was coming under fire on Thursday after a video of him being released from an Abuja police station emerged just a day after he denied in a live video interview that he was never detained by the police.

GreenWhiteGreen GWG reports that Kpokpogri was detained in the wee hours of Tuesday after he caused a scene at the Transcorp Hilton Hotel, Abuja where his former girlfriend was lodged.

He was according to a news report taken into custody to allow him regain his sanity. He was eventually released late on Tuesday.

However, hours after in a video interview from his house, Kpokpogri denied ever being detained saying that he had been in his house.

“I don’t want to talk about the matter, but the most important thing is that you can see that I am talking to you from my house.”

On the claim that the pictures of his arrest were photoshopped, he said:

“They were all photoshopped, you can see my house now, I am in my house, so disregard those information.”

However, SDK posted a video film of the Delta politician being released from police custody triggering a fresh wave of allusions as to the reliability of Kpokpogri with many celebrating him as a man of lies.

The post was liked by Halima Abubakar among many others.

Breakup wey people dey do like grown adults should…. These ones turn am to “world war 5”🥴. Make dem getattttttt

Kpokpo can lieeeeee. Always denying. Denied being arrested and the the VN. Kpokpo accept your sutuation with your full chest

And my gender will still go and sleep this guy..tueh

But why was he still lying he wasn’t detained?? This guy lies for a living. Tufiakwa

The kpokpo self don Lean, looking exhausted and devoid of Energy😂😂 wahala no too much?

ifeoma_oddih like many others was less bothered about the arrest and release of Kpokpogri saying that Tonto Dikeh was also allegedly arrested in Dubai but fought off the claim.

I still do not understand. Arrested or not, detained or not what is our Business with relationship gone wrong. Same way she denied and mocked you Stella when she was detained in Dubai. Please Nigeria has more pressing issues biko. Make una rest

The man looks frustrated already. He should check his lifestyle and make amend !

This matter is tiring🥱they should settle whatever scores it is. Being peaceful is ultimate. But kpokpo can lie sha😂😂😂

Where you expecting him to accept he was detain? Oga that can lie for African. Saving people’s nudes as savings accounts