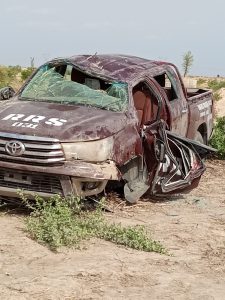 One person has been reported dead and four others injured as a fracas broke out on Saturday at the Auno check point in Borno, when some soldiers attached to the 7 Division of the Nigerian Army assaulted members of Borno State COVID-19 Committee enforcing the interstate lockdown order.

The News Agency of Nigeria (NAN) reports that the state Attorney General, Malam Kakashehu Lawal, and Commissioner for Health, Dr Salisu Kwaya-Bura were among the committee members when the incident occurred.

Lawal, who spoke to newsmen on the incident, alleged that the soldiers forced their way pulling down the barricade preventing non-essential travellers into the state by the committee.

He said that the troops in three Hilux guntrucks, who claimed to be on a mission to repel Boko Haram attack on Gubio, fatally struck the convoy of the Rapid Response Squad (RRS), enforcing the lockdown.

He said that the impact of the collision propelled the RRS Hilux vehicle down the roadway, at which point it summersaulted killing one and injuring three other security men.

“After hitting the vehicle, the soldiers pointed their guntrucks at us and began assaulting us.

“One of the soldiers looked at me and told me “to hell with democracy, useless democracy.

“Others raised thier guns at us, while one of them removed the cap of a policeman attached to the team.

“A cameraman attached to the team from the Deputy Governor’s office was also attacked and beaten while his camera was seized by the soldiers,” Lawan said.

Kakashehu said that in spite of the confrontation, he had asked the policemen in his team to remain calm, as the rampaging soldiers assaulted them.

“Why we stood our ground at the scene was to call on journalists and the military authorities to come and witness what was happening so they could bring an end to the impunity.

“As Nigerians, the mission and vision of the Buhari-led administration and also the Chief of Army Staff, is to save the lives and property of the people.

“So we cannot just allow a chunk of military men to cause any form of harassment when people are there on their official responsibility,” Lawan said.

NAN reports that that it took the efforts of the state Deputy Governor, Alhaji Usman Kadafur, and the Garrison Commander of 7 Division,  Brig.-Gen. Sunday Igbinomwanhia, to bring the situation under control.

Also speaking, the commisioner for health told the military commander that the soldiers pointed a gun at him after he identified himself.

He added that the soldiers equally forced all the motorists to come into the town without undergoing any COVID-19 test, an action he said, could hamper efforts of government in fighting the COVID-19 pandemic.

Kwaya-Bura explained that the state had so far recorded more than 400 coronavirus cases.

“Yesterday alone, more than 40 persons who travelled into the state  were COVID-19 positive. This prompted the committee’s decision to come and impose the lockdown on this road today,” he said.

Meanwhile, Kadafur, who doubles as the Chairman of the COVID-19 Committee, condemned the incident, describing it as “unfortunate”.

He said that when the incident was reported to him, he quickly alerted the Garrison Commander to come to the scene in order to restore calm.

“In a situation like this, you have to look at the psyche of the individuals involved because it maybe me that is attacked tomorrow,” he said.

The deputy governor urged the military to investigate the incident to avoid a recurrence.

Reacting, Igbinomwanhia apologised to the COVID-19 team over the incident.

He assured that the army would set up a commission of enquiry to investigate the incident and vowed to punish erring soldiers.