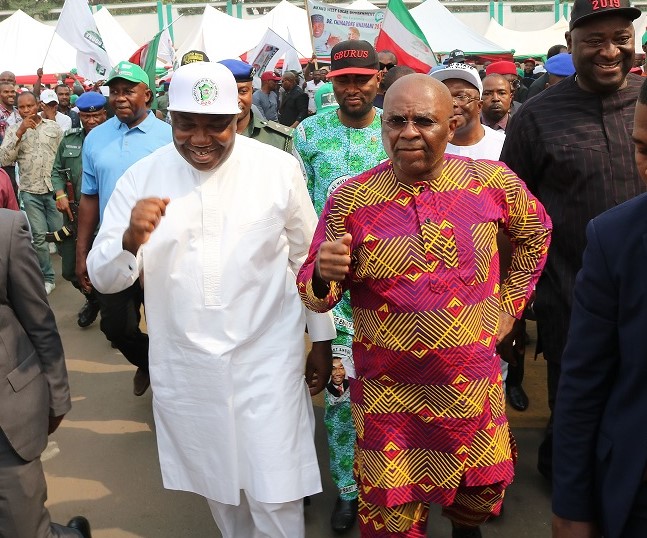 The race for the governorship seat of Enugu State has continued to gather momentum following the recent congregation of the Ebeano political family founded by former Governor Chimaroke Nnamani, who currently represents the Enugu East senatorial zone at the upper chamber.

Although power has gone round the three senatorial zones, as Governor Ifeanyi Ugwuanyi completes the cycle, which started with Governor Nnamani from Nkanu East in Enugu East zone in 1999 before moving to Enugu West zone where Ugwuanyi’s immediate predecessor, ex-governor Sullivan Chime hails from, there is no consensus as to where the next governor should come from.

While some believe that having gone round the districts, the next governor could come from any of the zones, keen observers of Enugu politics believe that one thing that holds the members of Ebeano and Gburugburu movement is the emergence of the next governor of the state from the Enugu East senatorial zone.

Nnamani recently led some of his cronies on a homecoming to Governor Ugwuanyi in a political move that many see as to help bring a convergence between the two. However, GWG understands that there is still a wide gulf between the two on who should succeed Ugwuanyi in 2023.

Whereas Nnamani is said to be routing for the candidature of his former Chief of Staff and oil magnate, Mr. Peter Mbah, who hails from Nkanu East Council of the Enugu East senatorial zone, there is widespread belief, especially among political pundits, that Governor Ugwuanyi, from his purported body language, is looking in the direction of Isi-Uzo LGA.

Many are quick to point at a recent interview by Barr. Raymond Okenwa, a vocal member of Ebeano political family and Senator Chimaroke Nnamani’s confidant, who narrowed the race for the governorship seat to four local governments of the Enugu East senatorial zone.

He said for justice to prevail, only Nkanu East, Isi-Uzo, Enugu East, and Enugu North should be entitled to the race from the zone, although he later withdrew Enugu North, saying it had produced the former governor of old Anambra State, the late Chief Christian Onoh.

Meanwhile, the angling for the coveted seat between Chimaroke’s clan in Enugu, which referred to itself as core Nkanu and the Isi-Uzo, which is said to belong to the Nsukka cultural group, has witnessed fireworks in the media for several months now.

Many fear that this, if not well handled, could spell doom for the newfound voice and the coming together of the Ebeano political family.

“If we are not qualified to aspire to the governorship of Enugu State as bonafide part of Enugu East zone, is it Enugu West’s turn or Enugu North’s turn we are going to take?”, our source queried.

Also, a reporter with Vanguard, Dennis Agbo one of the national dailies, who instructively hails from Isi-Uzo, had in a recent analysis, called on the “core Nkanu”, where Chimaroke Nnamani comes from, to use the 2023 governorship to fully reintegrate Isi-Uzo and reward them for their support through the years.

“As the 2023 elections draw nearer, political manoeuvring is accepted, but not twists of history. Isi-Uzo was earlier ceded to the Nsukka zone because of its location in the Igbo North-East. While in Nsukka, Isi-Uzo asserted itself and on its return to origin has been playing indispensable political and cultural roles. The core Nkanu, as claimed, have held and still hold dominant positions in Enugu East senatorial zone, it is time to fully reintegrate Isi-Uzo that has the blessing of relationships with all divides of Enugu state”, he wrote.

Though Ebeano had recently vowed to acknowledge Ugwuanyi as the political leader of the state, it is, however, perceived as the succession approaches and as the former leader seeks to rediscover himself that the issues of peace and war with his former disciple turned leader could throw up the option of war or peace.