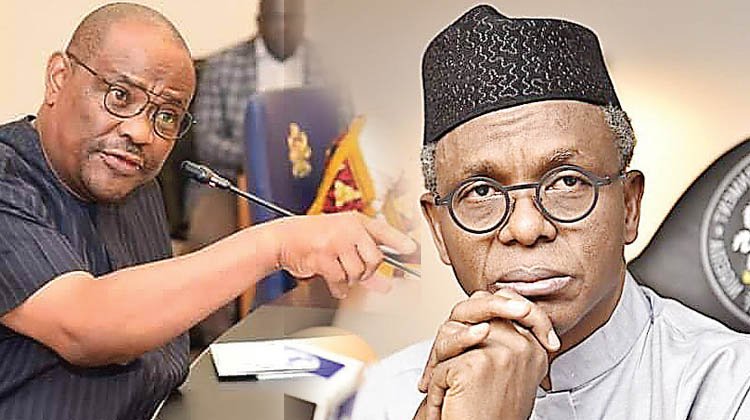 Director General of the Voice of Nigeria (VON), Osita Okechukwu has warned that conceding more powers to governors would turn some of them like Mallam Nasir El-Rufai and Nyesom Wike into monsters.

Reacting to the call for restructuring as canvassed at the Southern Governors summit in Asaba Delta State, he warned that going that way would put the country’s democracy in grave danger.

Okechukwu, a chieftain of ruling All Progressives Congress (APC), made the assertions in a statement on Thursday made available to  GreenWhiteGreen GWG.

He recalled that President Muhammadu Buhari in 2018 endorsed the amendment of the 1999 Constitution of the Federal Republic of Nigeria, granting financial autonomy to the State Judiciary and State Legislatures, as foundation for real restructuring, but painfully, two years down the line, the Governors have refused to implement it

Okechukwu maintained that Nigerians cannot expect good governance when the Governors acting as “Emperors” had locked up all democratic institutions in the state.

He said, “Whereas one endorsed the Southern Governors communiqué that the progress of the nation requires that urgent and bold steps should be taken to restructure the Nigerian Federation leading to the evolution of state police, review of revenue allocation formula in favour of the sub-national governments and creation of other institutions which legitimately advance our commitment to and practice of true federalism, one is however of the candid view that we need Dual-Restructuring.

“It will be paradoxical for us to expect good governance at the sub-national level when the governors have locked up democratic institutions.

“Secondly, we need to devolve relevant powers from the Exclusive Legislative List to States and Local Government Councils.”

Insisting that Nigerians must tread carefully, Okechukwu warned that they should not because of the palpable insecurity, despondency and despair in the land hand over more powers to Governors who are already mismanaging powers as Emperors.

He maintained that doing so will by omission or commission create Frankenstein Monsters which will put our democracy in harm’s way.

“To give life to Section 121(3) two years down the line Mr. President signed Executive Order 10 in 2020 and the governors in uncommon bi-partisanship headed to the Supreme Court to block the Executive Order 10. The outcome is the paralysis of activities at the judiciary nationwide by JUSUN.

“Earlier on Parliamentary Workers nationwide were on strike, at huge collateral damage to national development. The question is why didn’t the governors implement the amendment of the Section 121(3)?”

“Secondly, can the rights of the citizenry be guaranteed if State Police is enacted under Emperor Governors without independent judiciary and legislative oversight functions?”

Noting that some of the governors could turn into monsters, he said: “Thirdly, what happens to the opposition under State Police with His Excellencies like my dear friend Malam El-Rufai and Wike? This is without being immodest or personal, just samples.”

“Fourthly”, can transparency and accountability be guaranteed when more money is devolved to States with Rubber Stamp legislatures?

Okechukwu maintained that “for our collective good and prosperity of the greatest number of our people, we should shine our eyes and use the golden opportunity presented by adversity to embark on Dual-Restructuring.

He added, “Luckily Mr. President has commenced this patriotic and democratic journey.”

Related Topics:headlinesOsita Okechukwu
Up Next