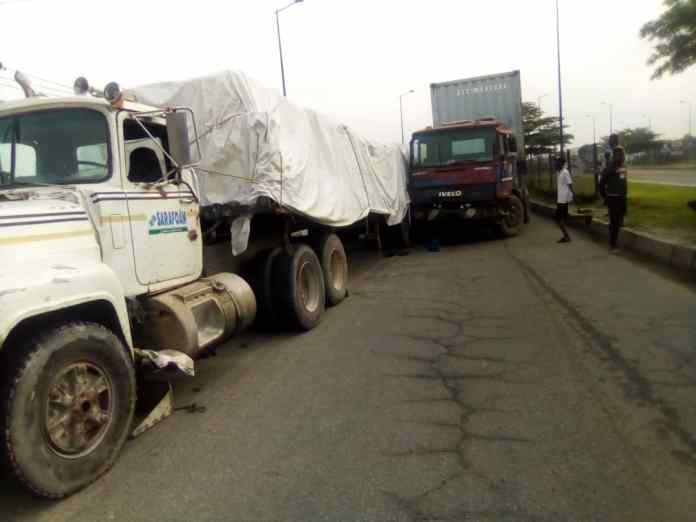 There was traffic congestion on Thursday morning as road users and commuters on Ikorodu/Mile 12 axis plying the route were cut off sequel to a road accident involving three trucks.

As a result of the incident that occurred at about 5am at Itowolo inward Mile 12, gridlock was said to have stretched to Ikorodu.

READ ALSO: BBNaija Reunion: Why Kaisha Walked Out Of The Show

According to an eyewitnesses’ account, a container fell off from its flat body unto the Bus Rapid Transit (BRT) corridor while on motion to Mile 12, and this disrupted vehicular activities on the corridor.

An eye witness Serifat Omogbemiro who was on her way to Idumota said vehicles including BRT had to use the major road.

She said, “this affected free flow of traffic in the axis. As if this was not enough, the traffic gridlock got worse after two full loaded trailers journeying inward Mile 12 hit themselves from the rear at Itowolo Main Carriage Way thereby blocking the entire road inward Mile 12.

Some passengers resorted to trekking in order to meet up with their routine while motorists resigned theirselves to fate,” she said.

Another eyewitness Tony Okonkwo said the fear of being attacked by traffic robbers engulfed many, but their fear was allayed due to the presence of law enforcement agents.

It was learnt that officials of Lagos State Traffic Management Authority (LASTMA), in the axis had a hectic day managing the traffic.

Some erring drivers were said to have contravened the traffic rule and drove against traffic.

At press time the officers were noticed doing the excavation exercise.

BBNaija Reunion: Why Kaisha Walked Out Of The Show