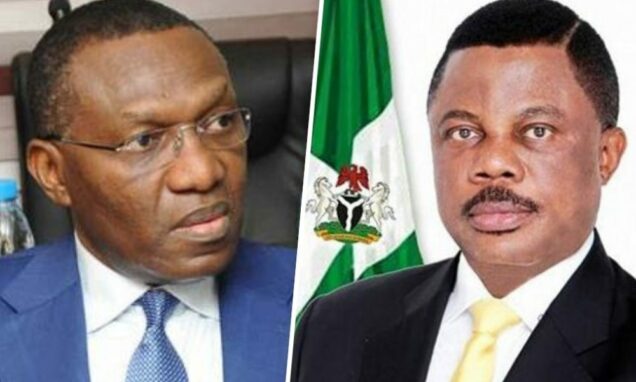 Senator Andy Uba has challenged Governor Willie Obiano to speak up on the alleged $4 million bribe purported to have been offered by a Southeast governor working in concert with his wife to compromise the forthcoming Anambra governorship election.

Expressing disappointment at the development, the Senator Andy Uba Governorship Campaign Organisation, SAUGCO in a statement issued by its Director, Media and Publicity, Hon. Victor Afam Ogene in Awka, the State capital, called on the nation’s security agencies to swiftly unravel those behind the sordid attempt to subvert the will of ndi Anambra.

“A national newspaper,  Vanguard, had in its edition of Saturday, October 16, 2021 reported inter alia: “A Southeast governor and a top official of the Independent National Electoral Commission have run into trouble with security agencies over a princely sum of $4 million bribe doled out by the governor as bribe to compromise the November 6, gubernatorial election in Anambra state,” the Andy Uba campaign challenged Obiano on the alleged bribe issue.

“Since the scandal blew open, neither Governor Willy Obiano nor his Commissioner for Information and Public Enlightenment, Mr. C. Don Adinuba, have mustered the nerves to utter a single word in response, despite clear and unassailable indications that, indeed, the governor at the centre of the bribery saga is the Anambra State helmsman.

“Instead of coming clean on the allegations, as it affects it, the Obiano administration have rather chosen to divert attention, by engaging third parties and social media miscreants under its payroll to engage in a wild goose chase over who the alleged governor and his spouse are.

“Besides the $4 million bribe money, the newspaper report also made mention of ‘the wife of the politician, who is described as an influential and powerful first lady in the Southeast(who) is reported to have been meeting secretly with many electoral officers, EOs, who are key to the forthcoming election.

“In the face of the puerile attempts to divert attention from Mrs Ebele Obiano as the First Lady in issue, we hasten to raise the following posers:

•Which First Lady in the Southeast is reputed to freely dish out slaps to aides and government functionaries?

•Which First Lady did her husband openly address as ‘Her Excellency, the Governor’ in a viral video?

•Which First Lady is known to vet government appointments before release?

•Which First Lady chastised her husband’s deputy, to the point of compelling him to defect to another political party, simply because she took umbrage at him paying a private visit to a prominent son of the state?

Noted the newspaper: “The evidence against the governor’s breach of his oath of office and public trust is strong but he is still protected under the immunity clause, but we will see what happens once his immunity elapses.”

We ask again: Of all the governors of the Southeast, whose immunity is due to expire soon? Governor Willy Obiano of Anambra state, of course.

“We, therefore, call on our nation’s security agencies not to lend credence to current boasts within government circles in Awka, that the bribery saga would fizzle out in a matter of days.

“On our part, we call on the media, civil society organisations and anti-graft agencies to beam their searchlights on the burgeoning crisis, which is capable of tainting the outcome of the Anambra governorship election, if not nipped in the bud.”