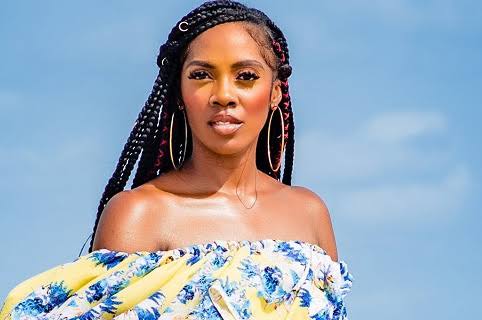 Popular Nigerian musician, Tiwa Savage, has dripped another cryptic message on her Instagram story. The musician claimed some people will be happy when she is no more.

She stated this on her Instagram story on Monday.

In the post, Tiwa Savage expressed her sadness at the death of her father and friend, Obama DMW, also known as ’44’, who was also Davido’s aide.

“I was sad at the passing of my dad and 44 but at least they are no longer in this cruel place. Some people will be happy when I am no more,” the mother of one wrote.

Tiwa Savage latest post comes a week after a sex tape featuring her and an unnamed lover surfaced online.

Amidst the scandal, she had said, “Charge that sh*t to the game and never speak on it again.”

Before the sex tape found its way to the Internet, Tiwa Savage had granted an interview where she spoke about an unknown person attempting to blackmail her with her sextape which inadvertently found its way to snap chat.

She said her boyfriend who recorded the tape had mistakenly posted the same on Snapchat. When he (the boyfriend) realised his mistake, he deleted the video but the damage had already been done.

Related Topics:Tiwa Savage
Up Next