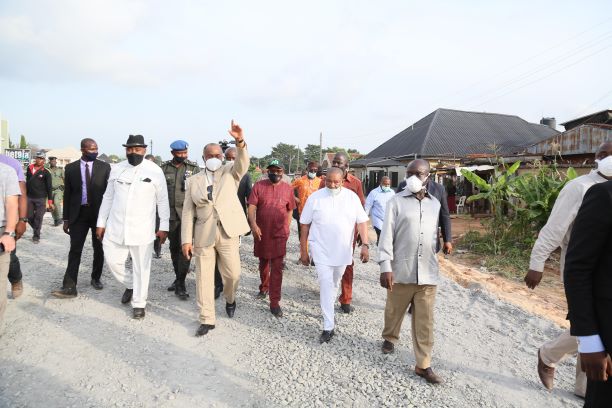 Governor Hope Uzodimma has enjoined Imo people to ignore rumours and what he Friday described as fake news being spread that Fulani Herdsmen are hiding in different parts of the state.

Governor Uzodimma who linked the assertions to the opposition and those he described as his detractors, said there was no truth in such rumours and that those spreading them were desperate to destabilise the state.

Addressing newsmen on Friday at Government House, Owerri after inspection of ongoing roads and drainages in Owerri and its environs, the Governor reiterated that, under his watch, Imo and the citizens are safe.

The Governor who expressed satisfaction with the level of work being carried out by the various contractors noted that the projects, which are now at different stages of completion are being done according to specifications.

Governor Uzodimma added that the State is using the period of the Covid-19 lockdown to carry out some critical earth works on the awarded contracts so as to make things easier as soon as the lockdown is completely relaxed.

He enjoined Imo people to continue to support the policies and programmes of his government, which is determined to provide good governance that will improve people’s welfare.

The Governor was accompanied on the inspection by the Secretary to the Government of Imo State, Chief Cosmas Iwu; the Chief of Staff, Government House, Barr. Nnamdi Anyaehie; Honourable Commissioners for Works, Information & Strategy: Raph Nwosu and Declan Emelumba, and other government dignitaries.