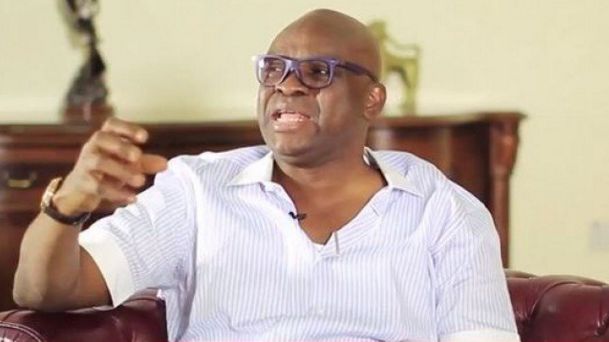 Honourable Adewumi also stated that available records have not shown that the PDP would miss Fayose if he eventually carried out his threat.

Rather than, missing the ex-governor, Adewum, former Deputy Speaker in the Ekiti State House of Assembly posited that the PDP would heave a sigh of relief, adding that Fayose was instrumental to the current calamity befalling the party in Nigeria.

Speaking with DAILY INDEPENDENT on the recent threat by Fayose that he would dump the PDP if his interest was not protected in the party’s  2022 Governorship Primaries, Adewumi maintained that the former governor was only parading overbloated political credentials.

The  PDP man argued that there was never a time Fayose’s political bravado gave the party an edge or victories in competitive elections.

He said, “If Ayo Fayose leaves PDP, It will be good riddance to bad rubbish, the party and its teeming members will not miss him, there will even be peace across the board. Fayose’s exit will be celebrated; the party will move forward because no man is indispensable.

“Ayo Fayose is enjoying the benevolence of Peoples Democratic Party and the Ekiti populace who appreciates his charisma, boldness and some touch of shakara whereas it’s all Machievellic style.

“This will not be the first time Fayose’s candidate will be losing the election, take a look; He supported Dr Kayode Fayemi against Engr Segun Oni in the governorship re-run election of 2009 and lost; Ayo Fayose contested for Senate under Labour party in 2011 he lost;

“Similarly, He supported Professor Kolapo Olusola in the 2018 gubernatorial election he lost; Ayo Fayose supported  Ekiti State PDP National Assembly candidates in the 2019 election and they all lost, except Chief (Mrs) Biodun Olujimi whom he campaigned vigorously against in mainstream and New Media,” Adewumi alleged.